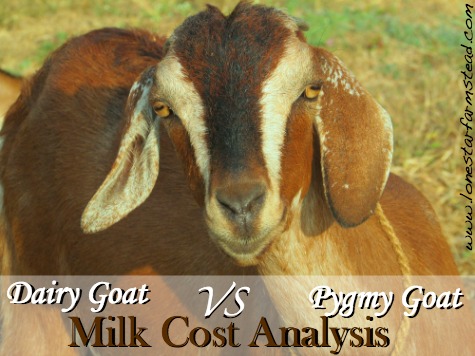 Fresh, raw milk.  Many people equate homesteading with raw milk.  It is classic homesteading in their mind.  I know that was true for my wife and me.  Besides chickens, one of the first animals we wanted was a dairy cow.  We could practically see the cow standing in the pasture.  Given the condition of our pasture, any cow we purchased would need to have 100% of its feed supplemented.  That meant hay and grain.  The cost was just too prohibitive.  Knowing that a cow was not an affordable option for us in the near future, we did what many homesteaders do when they approach this road.  We opted for goats in the interim with plans to later transition to a cow.  I read articles that compared diary goats to dairy cows.  I looked at the cost analysis.  Goats seemed to fit the bill perfectly.

Goats are ruminants like cows, but unlike cows, they prefer to browse like deer.  They love to eat weeds, leaves, bark, pine needles, and other things along those lines.  They would even eat our grass burrs (or stickers as we call them).  They don’t, however, prefer much grass.  Many people mistakenly purchase goats thinking that they will use them as lawn mowers to keep their grass down.  If you do this, you will be sorely disappointed.  As I mentioned before, our pasture is in poor condition for raising a cow because there is no grass available.  This meant that it is the perfect environment for goats.  The pasture is overgrown with weeds, small trees, poorly trimmed trees with low hanging branches, stickers, vines, nettle, and pretty much everything you don’t want in a productive pasture.  Goats seemed like a no brainer.  The cost would be lower, they would take up less space, they would help clear the pasture for future use, and they would provide us with milk on top of it all.  So I set out to buy a goat.  All of the articles I read from homesteading sites said to buy a dairy goat.  I didn’t and I’ve been happy with my decision and as we compare standard dairy goat breeds with pygmy breeds you’ll see why.  Let’s dive in.

For a closer look at milk production and butterfat content, take a look at this chart compiled by the New York State 4H Association.  So far it would seem that diary goats are the way to go.  Why would anyone even consider anything else?  Let’s take a moment to examine the cost of the milk from that diary goat.

A goat ration (the entire diet, not the sometimes incorrectly referred to grain portion of the diet) should consist of:

For the ease of compiling cost, I am using an average weight of all the diary goat breeds standard weights, 127.5 lbs.  Diary goats in milk require 5-7% (I’ll be using the average of 6%) of their body weight in ration, with 2-3 lbs of that as grain supplement depending on their milk production.  This means that another approximately 5 lbs of hay would need to be fed daily.  A 50 lb sack of goat feed is currently running approximately $13 meaning that your per feeding cost on grain would run $0.65.

Roughage is very important in the goat’s diet and is necessary to keep the rumen functioning correctly.  Without a good roughage mat in the rumen, pelleted grain will pass through the goat’s system too quickly, reducing absorption rate and reducing your production to feed ratio.  Good quality roughage is going to be region specific on cost but for us here in north Texas, a standard two strand 80 lb bale of alfalfa is currently running $16.  This means that roughly $1 of hay per feeding is the cost.

This brings us to a total daily cost to feed the diary goat during lactation at roughly $2.  Using the information in the chart from the 4H Association we can estimate average milk production at 2.7 kg/day which translates to roughly 2.7 quarts of milk/day.  This means that your cost per quart of milk would be $0.75 or $3/gal.  To extrapolate this out over a 305 day lactation period you would pay $618 for 206 gallons of milk.*  Now that we have a good understanding of dairy goat production/costs let’s take a look at pygmies.

Pygmy goats are a miniature breed of goat that originated in Africa.  Over the years they were imported to the US through various channels and became popular for petting zoos and as house pets.  Pure pygmies are less than 23″ in height and does weigh less than 75 lbs.  Compared to standard goat breeds this is quite small.  Lactation period in pygmies is far less than standard diary goat breeds, averaging 150 days.  However, standard dairy breeds tend to be very seasonal dependent on breeding while pygmies are polyestrous so they can be bred year round.  Does could be bred in cycles to ensure year round milk production.

Pygmy goat ration should include:

Forage should make up 60-70% of the does diet.  Grain should be adjusted according to the needs of each individual doe which is one reason why we feed on a stand.  To assess the condition of your doe and whether you need to increase or decrease her grain, you can use this common scoring method.

Score of 2: Thin – ribs slightly more covered but apparent visually. Spine can be felt but with a smoother feeling between each vertebra. Pelvic region not so prominent but still not sufficiently covered. Score of

Score of 4: Fat – Indentation between the ribs can be felt but an overall smoothness present rather than individual identification of each rib. Spine can be located only when pressed. Pelvic region rounded and difficult to define. 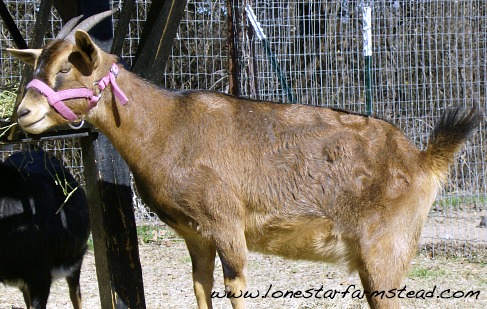 As with any goat, minerals and water should be free fed at all times.  Using the same averages as we did with the diary goats and a 75 lb average, we can compare their feed to production ratio to that of the dairy goats.

We found that with our pygmies, they did well with 1-1.5 lb of grain while in milk and when dried off we ween them back down to around 3/4 lb of grain once daily.  Using the average figure of 1.25 lbs the cost to feed the grain is $0.33 per day.

We feed our goats alfalfa and weedy (but not moldy) hay when we can get it.  They tend to snub their noses at the horse quality coastal so we don’t bother.  As noted before, alfalfa costs us $16 per 80 lb two string bale.  Due to all the forage available to our goats, we feed very little of it during the spring and summer months.  As fall progresses we increase the amount of alfalfa that they get.  When they are in milk, we provide them with about 2-3 lbs of alfalfa each in addition to forage.  Before drying them off we were getting a consistent 1-1/2 quarts of milk per goat with little/no weight loss (a little weight loss early is to be expected, especially in first time kidders as they will put a lot into milk production).  Alfalfa cost therefore would average $0.50 per feeding using the 2.5 lb figure.

Based on the time period that we have had the salt and mineral blocks available we can roughly estimate other costs at $0.15 per day.

Side by Side Comparison

Because this is a lot of information I compiled it into a handy chart for you. 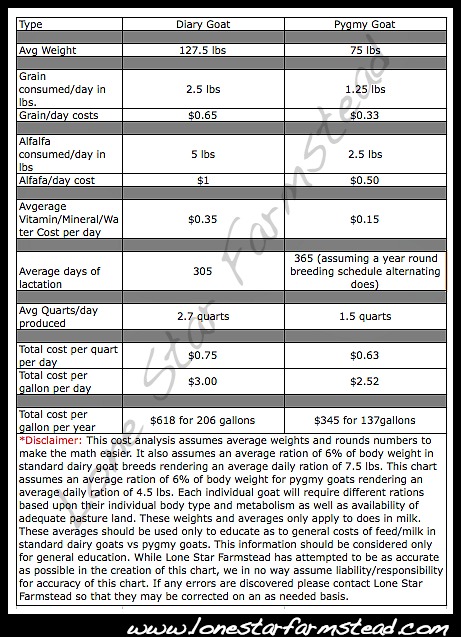 A few other things to consider:

Teat size: Pygmy goats have a slightly smaller teat size than standard dairy goats which may make it a little harder for some people to milk, particularly people with large hands or problems with dexterity (ie from arthritis).

According to this article from the National Pygmy Goat Association, “Natural teat conformation helps Pygmy does resist mastitis, a bacterial infection of the mammary system, usually gaining entrance through the teat orifice. Pygmies usually have small orifices in addition to well-attached udders that are held close to the body, out of harm’s way.”

Another important thing to know is that Pygmy goats have a greater natural resistance to Demodectic mange which is described as “nonpruritic papules and nodules develop, especially over the face, neck, shoulders, and sides. The nodules contain a thick, waxy, grayish material that can be easily expressed; mites can be found in this exudate. The disease can become chronic.” (Merck Manuals)

As you can see, there are advantages and disadvantages to either standard dairy goats or pygmies. For those wishing large scale milk production, the higher costs associated with raising standard dairy goats will likely result in much greater yields and profits.  For those wishing to raise goats strictly for personal use may find that the much lower costs of pygmy goats for a slightly lesser milk yield may be a much better option.  Reduced pasture area available on the homestead may also mean that pygmy goats are a better option. Either way you go, if gathered in a safe and clean manner, goat’s milk is sure to be a wonderful addition to your homestead.  Have a great day and God bless!

Huge shout out to my friend Sarah at The Free Range Life for sharing some wonderful photos of her dairy girls.

Keep in mind that each region, farm, and goat are different and your numbers could vary significantly from the averages I have used here.

In full disclosure, my personal numbers are drawn from a pygmy/Boer cross.  However, I found that my milk production numbers and feed costs were on average with full blood pygmy goats, thereby giving what I believe to still be accurate numbers for pygmy goats.

Article Name
Dairy Goat vs Pygmy Goat Milk Cost Analysis
Description
Compare the cost of feed to milk production in standard dairy goat breeds vs their smaller Pygmy counterparts. You may just be surprised what you learn.
Author
Brandon Sutter
Like what you see? Please share with your friends and the whole world...