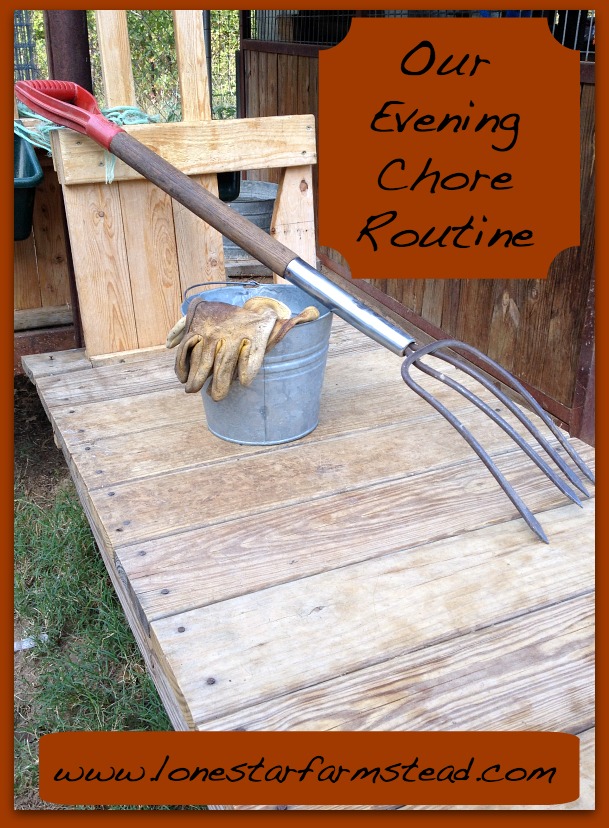 Our evening farm chore routine may not be glamorous but I thought it might be a neat way to give you a little glimpse into what taking care of a small farm entails.  Living on a small farm or homestead requires a lot of work.  There are morning chores, evening chores, the constant barrage of projects that need to be completed, and new problems that crop up everyday that require solving.  That’s part of what appeals to me about this lifestyle.  Everyday there is something different and everyday there are some things that are routine.  The balance is intriguing and gives you a break from the mundane while giving you the comfort of the routine.  There is also the burden and joy juxtaposition of owning farm animals.  Their care must be an everyday priority which can at times be burdensome but at the same time it is a joy to bond with the animals, care for them, see them enjoy your presence, and to see them grow and change.  That chore routine that sometimes seems grinding is the same handiwork responsible for so much of the bonding that occurs between you and your animals.  You are the provider and they the dependent.

If you were to visit my home around lunch and just sit and enjoy the fresh air you would hear the pleasant sounds of animals going about their day contentedly.  The sounds of the goats walking up and down the stairs makes a clacking/knocking sound.  The rooster crows as he senses potential danger and the rustling of the wings of the hens as they dash for cover is faintly reminiscent of a dirt devil blowing through the trees.  Hens in the nesting box cluck as they prepare to lay an egg and then squawk loudly as they finish their daily job.  The dogs bark and charge across the yard as another squirrel navigates the top of the fence precariously while moving to another tree.  The horses occasionally snort and stamp their feet while they stand in their favorite spot that is the closest corner shared between the house, the yard where the animals are kept, and the pasture where the horses live.  As the afternoon rolls on and the hour nears 5 o-clock the sounds of the farm yard begin to change.  It is sensed within as much as it is heard, although the sounds are undeniable.  The dogs move to wait patiently by the gate leading into the pen where the animals are fed in the evenings.  The chickens begin to amass near the gate as well, milling about the dogs, knowing that while they are fed in their coop, if they wait diligently enough, there are corn kernels to be had from the catching of the goats.  The goats will start to cry loudly, letting you know in no uncertain terms that dinner time is nearing.  The horses begin to neigh loudly in hopes of catching our attention.  Evening chore time is at hand. 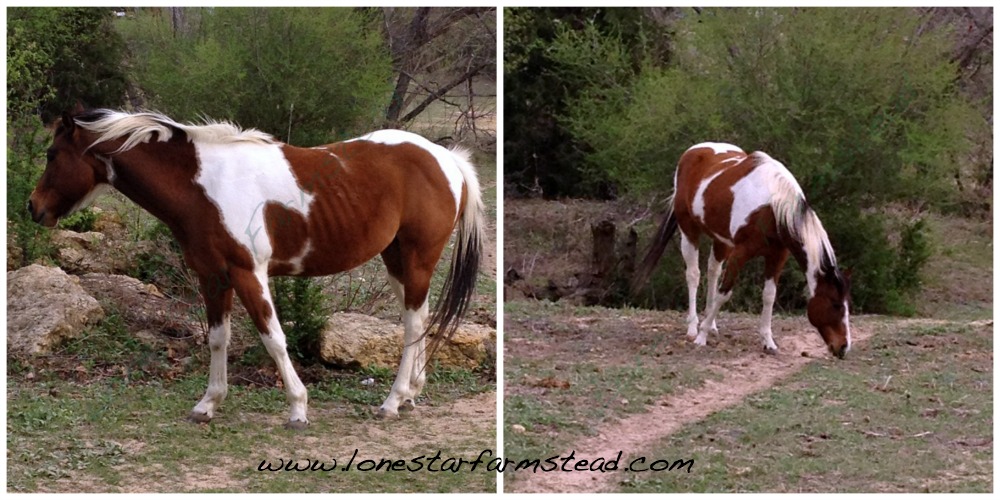 Around 6 ‘clock in the evening we begin putting away other projects from the day and we begin our evening chores.  The horses are fed first, receiving their evening ration of hay, oats, and sweet feed.  Their feed is stored on the front porch as the stalls in the barn do not have doors.  We have a hay feeder but we have found that it is easier to fork their hay ration into the wheelbarrow and wheel it out to one of the stalls, as the ration for both is larger than the hay feeder can hold.  Watering begins as well with the filling of the horse trough.  We also start watering some of the plants around the front porch.  When all that is done the water is shifted to other beds and we start collecting the other animals for feed time.  The watering of the gardens sets the tone for the remainder of the evening chore routine.  During this time the garden water is moved around as the timer on one of our phones goes off.  We water each bed for 9 minutes so all of the catching, hitching, feeding, and milking is done in 9 minute intervals until the watering is done.  We have 3 beds in the main garden, and three beds to water in the front garden area in addition to filling the horse trough.  There is a hose for the horse trough/main garden area and one for the front porch garden areas so we have 4 watering cycles of 9 minutes each. 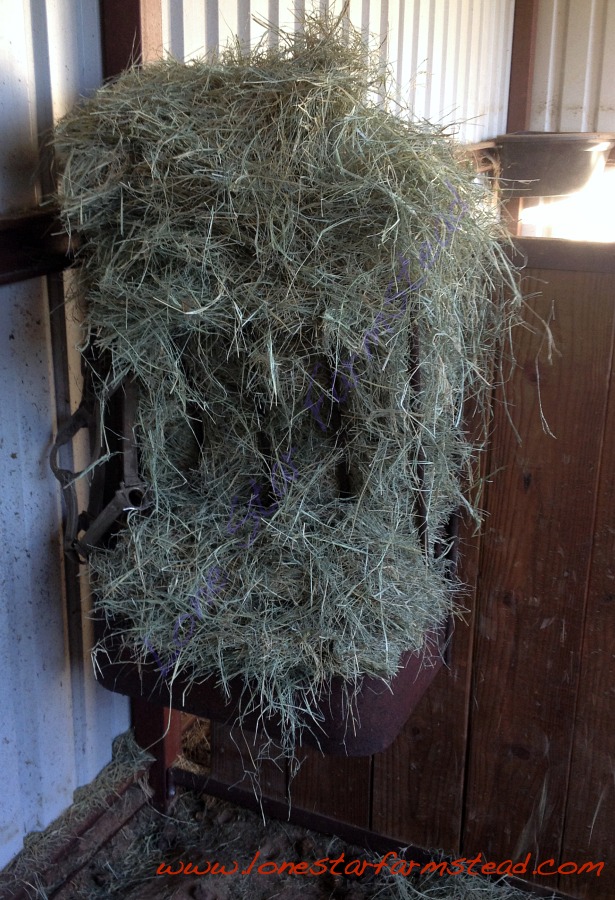 We lock all the animals out of the pen and we feed the entire clowder of barn cats and set out the dogs and pig feed.  We then allow the dogs in one-by-one using the gate as a squeeze chute to funnel in only the animals we want at the moment.  We then focus on catching the goats.  Our goats came from a farm where their only human contact was whomever came out and dumped feed in the troughs and then walked away, so despite how good they have become at allowing us to collect them and handle them they still will not allow us to walk up and put their leads on so our solution is to take a small bucket of corn and, using the gate again as a squeeze chute, allow one goat to get a small bite of corn as we hook up their lead rope.  They are fine with this process and so it works for us.  We then allow the one goat through who is on a lead rope and lock out the others.  The goat is then tied off to a hitching area while the remaining goats are caught in the same manner.  They have learned to wait patiently while hitched up as we have four goats and only 2 milking stands.  We used to allow them to free feed from a trough, but we abandoned that method for this approach after a couple of months due to the fact that we had no idea how much feed each doe was getting. Regulating a does feed is important if you plan to milk them.  As a result, they eat their ration while in the milking stand.  Two does are placed in the milking stand, given their ration of grain and alf alfa pellets, and, for the most part, stand passively eating while they are milked.  After the water is set and the dogs, cats, and pig are fed and the first two goats are on the stand, my son heads off to top off the free feed set-up we use in the coop for the chickens, check their oyster shell feeder, and top off both their waterers.  By this time we are usually done with everything but the last two goats so the dogs are run out of the pen and the two goats on the stand are moved and hitched up while the other two are moved to the stand for their turn.  At this point Mrs. Lone Star usually heads in to start on supper and I and the kids finish up milking the last two goats. 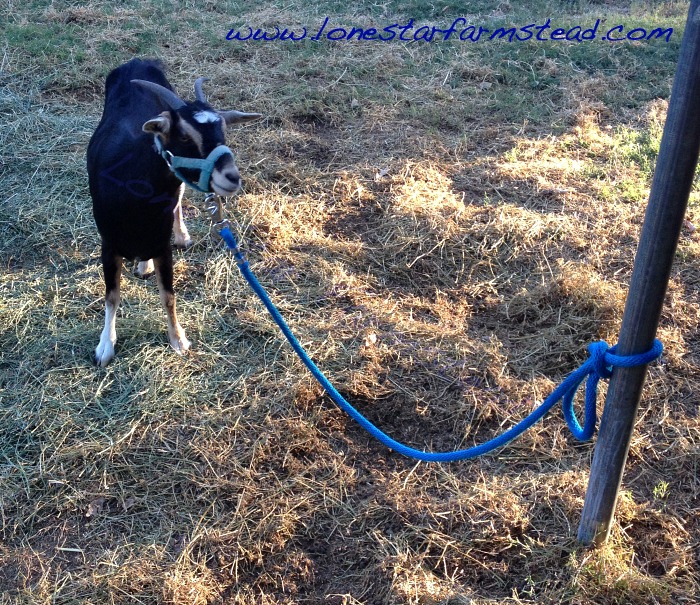 When they are done they are moved off the stand and all four goats are turned loose.  The goats and the pigs remain in the pen area for the night so they are close to the house and the dogs can run off anything that comes around to prey on them.  All of the remaining waterers are checked and everyone heads in for the evening.  While we had the two baby goats they were worked into the goat feeding routine but now that they are gone we no longer have to bottle feed.  The overall time frame for evening chores runs right at an hour give or take a few minutes depending on how many of us there are to help.  The few times where I have had to do the entire routine myself took me 1 hour 15 min.  Our fastest time has come in at 45 min.  Of course days where we do not have to water because of rains helps to cut down the time as well and we usually come in at 40 min on those days.  The last thing that has to be done in the evenings, once the sun goes down, is to close up the coop and count all the chickens to make sure everyone has made it in safe for the evening. 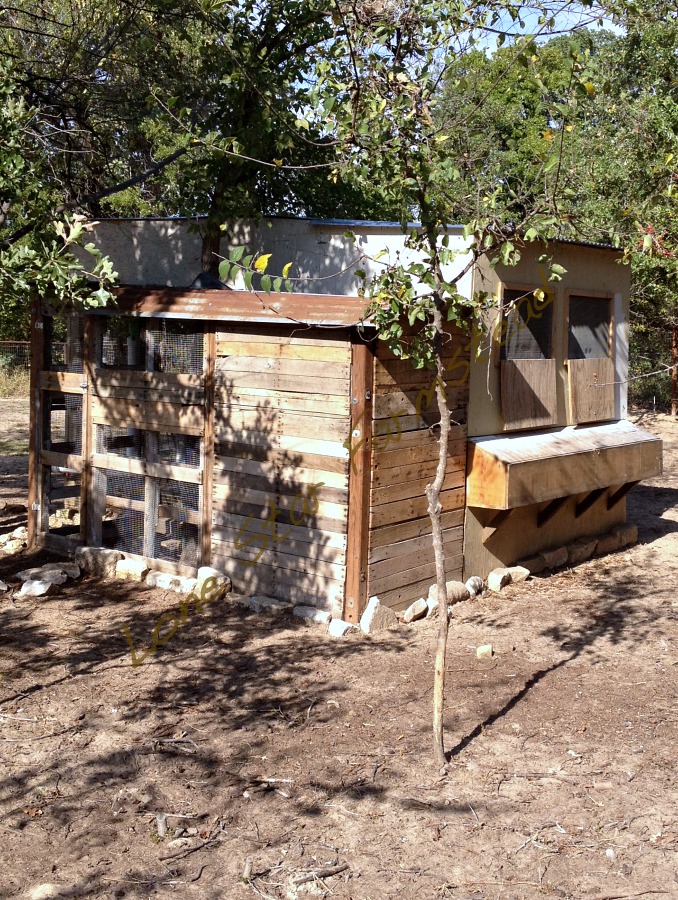 That is our evening chore routine as it stands during the spring/summer/early fall months.  As with anything on the farm the chore routines are never completely fixed as they wax and wane with the seasons.  As the garden dies back and is prepared for late fall/winter and the goats are freshened and milking stops the chore routine is cut down.  During the early spring there are new baby animals to deal with and their needs and the time that they demand varies as they grow and change but two things that can always be counted on is that there will still be chores to be done and an evening routine that is as dependable, flexible, and yet rigid as the seasons.  Have a great day and God bless!