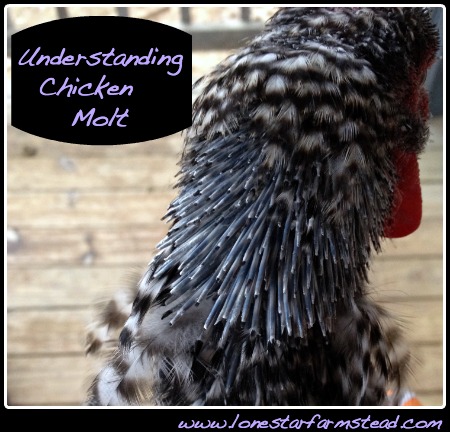 It’s fall and you notice that your chicken coop looks like a chicken murder crime scene.  Feathers are everywhere and you are starting to count your chickens (not like the time you counted your chickens before they hatched) to make sure no one is missing.  And where are all your eggs?  Did whatever snatched your chicken get the eggs too?  If you’ve noticed a semi-naked chicken wandering around the yard then you are most likely dealing with a molt. 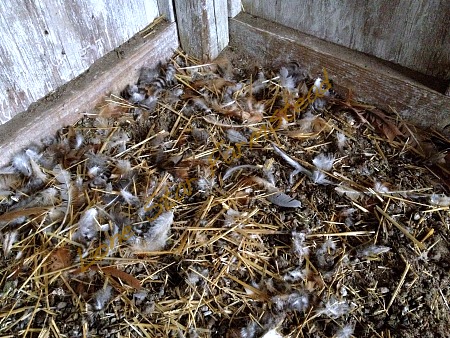 What is a molt?

A molt (or moult), when referencing chickens, is the loss of feathers as a part of the natural process of feather renewal.  Chickens experience a molt annually to replace feathers.  Full grown feathers are dead structures and as such, do not grow and can sustain damage, therefore they need to be periodically replaced.  This is a biologically driven process and will occur no matter how wonderful the condition your girls feathers are in.  This process also results in a loss of egg production in most cases.

What causes a molt?

In a healthy chicken, molting is triggered by changes in daylight.  Chickens are sensitive to daylight, in fact it is what triggers the egg laying cycle as well.  Chickens sense light through an organ called the pineal gland in their brains, meaning that even blind chickens can sense light and will follow the same molting and laying routine as other chickens.  For more interesting things about chicken eyesight you can read this article on 12 Fascinating Facts About Chicken Eyesight by Lisa of Fresh Eggs Daily.  There are other things that can cause molting that are not normal so when you notice molting in your flock, check to make sure these other signs are not present so that you can rest easy that it is normal, annual molting:

A side note on forced molting.

This is a process used by commercial egg farms where feed is withheld for 7 – 14 days to induce molting through starvation so that their flock can molt quickly and all at one time so that they will return to production quicker.  I DO NOT recommend this practice as it causes undo stress on the birds for the sake of production and can cause problems with the chickens health and can shorten their life span.

If none of these are present, then everything is normal and the chicken will regain its feathers in a few weeks.  When molting, chickens experience two different types of molts, hard or soft.

In the wild, birds of all kinds almost always experience a soft molt which results in the gradual loss of feathers over a long period of time.  It is generally symmetrical so that the bird does not lose the ability to fly.  Wild birds experiencing a hard molt would be susceptible to predators and would likely not survive the molt.

Domestic chickens on the other hand can, and often do, experience a hard molt, meaning that they lose a significant number of feathers and can end up almost completely featherless for a period of time.  This can be both good and bad.  Soft molts will mean that your chicken is out of production for a longer period of time, while hard molts will mean that your chicken will be back to producing eggs more quickly.  Hard molts can, however, be a bit of a problem in cold climates but more on that in a minute.

When will my chicken regain its feathers?

Every chicken is different so there is no set time for the molting period, but in general it can range from 4-12 weeks with most chickens completing their molt in 7-8 weeks.  Chickens also molt in several stages.

Process and Order of the Molt

Regardless of whether your chicken is experiencing a soft or a hard molt, the loss of the feathers will occur in a fairly specific pattern.  As the new feathers grow in, a waxy cylinder containing the new feather will push the old feather out.  As the new pin feather continues to grow the waxy cuticle surrounding the feather will lengthen and eventually fall off or will be pulled off by the chicken during preening.  The waxy, cuticle covered pin feathers contain a vein, as the growing feather is alive as opposed to the full grown feather, which we mentioned is dead.  This means that the pin feathers are sensitive and can bleed if cut.  If this occurs, pecking is likely to happen and the chicken will need to be isolated and reintroduced to the flock slowly after healing.  The pattern of the feather loss and pin feather emergence occurs “from the head first, followed in order by those on the neck, breast, body, wings, and tail. A definite order of molting is also seen within each molting section, such as the loss of primary flight feathers before secondary flight feathers on the wings.”  (Molting of Laying Hens, Small Flock Management of Poultry, Mississippi State University)

What should I do for my chickens during molt?

Feathers are composed of 85% protein, meaning that growing new feathers is very taxing on the chickens body.  This is the cause of the usual drop in egg production during molting.  Most chickens simply can not put that much protein into feather production and have enough left over to produce eggs as well.  Increasing the protein content of your molting chickens feed will significantly help them to stay healthy and recover more quickly.  If you are using commercial feeds, the general recommendation is to switch from layer feed to game bird feed so that their feed protein content is around 20-22%.  If you are feeding a non-commercial, organic diet you will want to increase your protein items in your feed to help boost the overall protein content of your feed.  A couple of examples would be increasing corn content slightly (if you are using corn in your organic feed), or BOSS, also known as black oil sunflower seed.  You could also feed your chickens tuna fish, lentils, or some scrambled eggs (I know it seems strange, but trust me on this one, your chickens will appreciate it and the risk of turning your chickens into egg eaters because you feed them cooked eggs is a myth.  It simply will not make chickens eat their own eggs as they do not associate a scrambled egg with a freshly laid egg in the coop).  Make sure that you understand what proteins you are adding to your organic feed mix so that you can increase them in the correct ratio to achieve your specific goals (i.e. why you are feeding organic or non-GMO in the first place) while still achieving the protein boost your chickens need.  If you are feeding your chickens a vegan diet, I would highly recommend that you research a chickens natural diet in the wild and reevaluate whether you should be feeding a strictly vegan diet.  I do not recommend vegan diets for chickens, as it is not natural for them (although I can understand the convictions of some people and respect their decision if it is well researched and the effects on the chickens are understood).  If you have made the decision to continue with a vegan diet for your chickens, consider adding beans or other lentils to increase the protein content.  Try to reduce handling your chickens during molt as this will reduce their pain and stress levels.   Make sure that you reduce any other stress causes as much as possible.  If you are in an extreme cold climate or temperatures will be below freezing for a period time and your chicken is in a hard molt, you might consider moving the chicken to a warmer location or using a saddle or some type of homemade sweater for the chicken, since the loss of a large number of feathers late in the season will mean that the chicken is unable to regulate its temperature well.  If you don’t, you could end up with a frozen chicken in the coop.  Be patient and you will soon be rewarded with a fully plumed chicken that will be back to producing eggs for you in no time.