This post was originally published in June of 2014. It has been reworked to update the post for your reading pleasure. 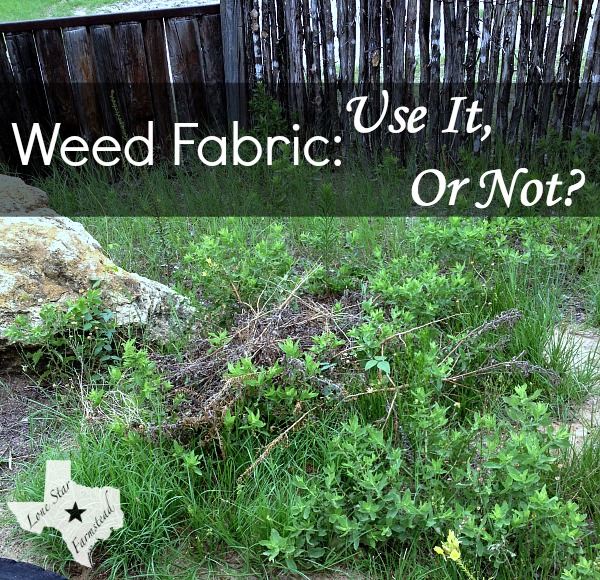 We are all guilty of it at some time. You know what I’m talking about. Falling for the “to-good-to-be-true” product. Maybe it was a combination dishwasher/microwave/T.V. or weed fabric for your garden. It’s hard not to fall for hype, especially when you see it everywhere now. FB, Pinterest, T.V., billboards. It’s a constant onslaught and let’s be honest. Not all of the information out there is honest, or truthful, or applies to you or your situation.
I have to admit, last spring I fully planned to use weed fabric when we transitioned to raised beds this year. I used it around a decorative bush that we planted and I had grand visions of beautiful raised beds completely weed free in the garden. Row after row of nothing but the plants I wanted and none of the weeds I hated pulling. Was I delusional? Perhaps. You see, I had seen articles on using weed fabric. I’d seen it used on very popular home improvement shows on T.V. It was in large bins at my local garden center. Who wouldn’t want to use it? The concept is so simple. Lay the fabric on the ground and place your raised bed over it, or lay it down in the bottom of your in ground beds. What’s not to love about it? When we planted the decorative bush, we covered it with mulch and it looked beautiful. Until a few months later.

The Nasty Truth About Weed Fabric. It Doesn’t Work.

The nasty truth about weed fabric; it doesn’t work.

Just a short time after the weed fabric went down, the grass started growing up. I just knew that I must have cut it too short and the grass was just growing in around the edges. So I pulled the grass and weeds up. Then I did it again. Eventually I had to start weed eating the border of the bed. Then I noticed that there was grass too far from the border to have grown in from the side. Surely it was because I had been weed eating, so if I just pulled the grass from the mulch on top of the fabric it wouldn’t be a problem. In fact the grass had grown through the weed fabric. Grrrr!! So I paid money for weed fabric, spent the time to clean up the bed, cut the fabric, lay it, mulch over it and I was back to square one. Only worse. I encountered the same problem my friend Anna at Northern Homestead did in her article Do Not Use Weed Control Fabric in the Garden. Desi Vicktoria, one of our Facebook followers says, “[I] have used it in the past. Works ok but has a tendency to work it’s way through the mulch to the top. AND it is NO match for Bermuda grass. THAT can make it through ANYthing…” I found that weeds and grass that have grown through weed fabric are very difficult to pull. It’s like trying to take a toy from a screaming toddler who is rolling around in the toy aisle at Wal-Mart while both your hands are full with melting ice cream. I’m sure you get my point.

Another problem with weed fabric is that it not only creates a barrier for weeds (theoretically) but it also creates a barrier for the roots to grow deeper into the soil. As our Facebook reader Prudently Frugal Homestead says, “I never understood it. Plants have roots that go several feet down, so if planting in a raised bed, if it works, it seems it would hinder your garden plants.” That’s exactly right. If you misjudge the depth of your bed the roots will have nowhere to grow and you will have the same problem you would have with a container, your plant will become root bound. The barrier also seals off all the good things in the soil that your plant needs, which we will discuss in a moment.

So What Is the Answer?

Make sure that the newspaper you use it not the glossy kind and that you use pages with minimal color ink as color ink has heavy metals which will be released into your soil.

Bonus Reader Tip: Another great option, in addition to newspaper and cardboard, is to use paper feed bags cut down the side, opened up, and laid out. Big thanks to our Facebook Follower Star B. for this tip.

How to use it.

Ideally, this would be done in the fall, after you have pulled your dead plants up for the winter. That way you could lay your soil/compost over the top to breakdown over winter. Then next spring, simply plant in your garden and add a new layer of newspaper, cardboard, feed bags, or paper grocery sacks. Cut a slit in the material and sow your plant or seed through the slit. If you are starting in the spring as I am, place your soil over the newspaper or cardboard, then place a new layer on the top just as you would if you had prepped the bed the previous fall, plant, and mulch. The bottom layer will eventually break down. Then each year as you pull up your plants, you continue to layer over more cardboard, newspaper, kitchen scraps, leaves, and anything else that you compost. This will allow you to compost right in the bed over the winter months, cover with a new layer of barrier and repeat the cycle. You will likely notice that your plants are in far better shape than the year before and if you have any weeds pop-up, you will be amazed at how easy it is to pull them from the rich, loose, compost soil.  Some people prefer to till the beds each year to help break it all up, but I am of the mind that I don’t till. If you till too deeply you can actually disrupt all the wonderful things occurring in the top few inches of soil.

When using the lasagna method I described above, you not only get the benefit of very few, if any, weeds, but you will also not create a barrier between the plants and the soil below where you have been creating a perfect environment for:

Wait! Don’t throw away that weed fabric just yet.

It isn’t completely useless. I have the perfect solution for you if you’ve already purchased a roll and now you’ve decided that it isn’t for you. It is perfect for creating pallet planters like our vertical pallet planter which will be getting a whole new crop of herbs very soon. 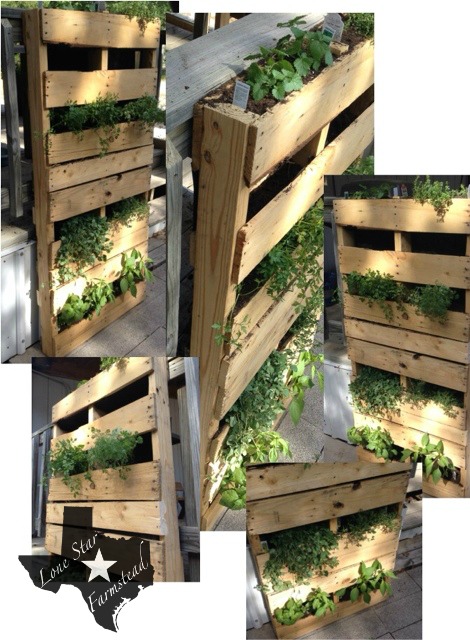 I hope that this year you will consider saving the weed fabric for some pallet planters, keeping it out of the garden, and rounding up some cardboard, newspapers, paper feed sacks, paper grocery bags, and compost for your garden. Your soil will thank you and your plants will love you. Have a great day and God bless!

Article Name
Weed Fabric: Use it, or not?
Description
Weed fabric is popular and is touted as an end all, be all solution to weeds in the garden, but is it really?
Author
Brandon Sutter
Like what you see? Please share with your friends and the whole world...