Since our last kid was born 2 weeks ago we have had problems with the nanny nursing.  She is a great mother and takes very good care of the kid but she will not let him nurse.  Typically with a rejection a nanny goat will completely ignore the kid and run them off.  There are lots of theories on why nannies do this sometimes but nothing concrete.  Most likely because there are multiple reasons, not just one simple reason.  In our case we did not have full rejection, just a refusal to allow him to nurse.  This particular nanny has a very large udder and while we do not believe her to have mastitis, we do believe that she has an engorged udder and that she produces an inordinately high amount of milk compared to other goats of her breed.  She produces as much milk as our other two nannies combined.   So here is what we did to address the problems with this particular goat. 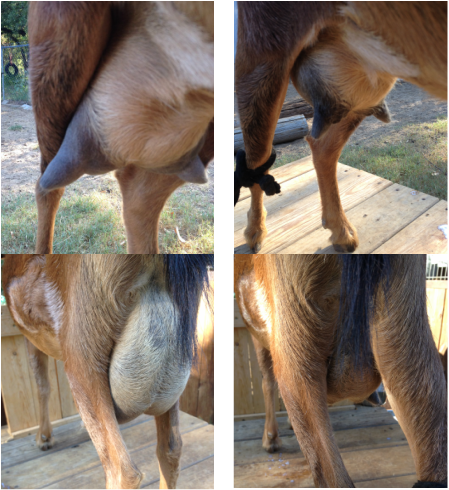 Our plan was to separate the nannies and the kids for half the day starting at around 1-2 weeks old.  Since the first kid was already at the 2 week mark and the other at a few days old, we decided that they would both be more comfortable with each other so we separated the older goat a little later than planned and the younger a little earlier than planned so as to coincide with one another.  We separate them from the nannies in the evening after evening feeding/milking.  They are locked in a large kennel area in the same part of the yard as the nannies allowing the nannies to see, smell, and hear them without allowing the kids to nurse.  We milk the one nanny that allows nursing in the morning and allow the kid to nurse on her throughout the day and then separate again in the evening.  The nanny that lost her kid and the problem nanny are milked in the morning and evening to keep them in milk.  We feed the younger kid with milk from his mother so as to keep things as close to natural as possible.  We feed the baby kid using a cheap $1 bottle from the dollar store.  We simply cut a small X in the top of the nipple which allows the kid to get plenty of milk without a problem.  There are more expensive and/or fancier options out there but this is working great for us and was super cheap to boot.  We feed on the following schedule based on the schedule from Fias Co Farm:

Since we started at around the end of week one we just started with the 3 times a day schedule.  We feed the full 12 oz or less if he gets full early.  We do not feed more than this as he sometimes will gorge himself.  We make sure that we hold the bottle up to mimic the way the he would feed from his mother.  Any other position could cause problems as the milk might not bypass the non-functioning rumen.  That’s it.  So far this schedule and method of feeding is working well for us.  The kid was very thin and was not putting on weight at the same rate as his half-brother but he is now.  His sides are filling out and he is looking healthy and energetic.  He gets mom’s milk, she gets proper udder care which is helping to reduce the swelling and pain associated with the engorged udder, and they are able to live happily together.  Everyone is well adjusted to the routine and that is important to their health and happiness and just like a happy wife contributes to a happy life, happy farm animals contribute to a happy farm.  Have a great day and God bless! 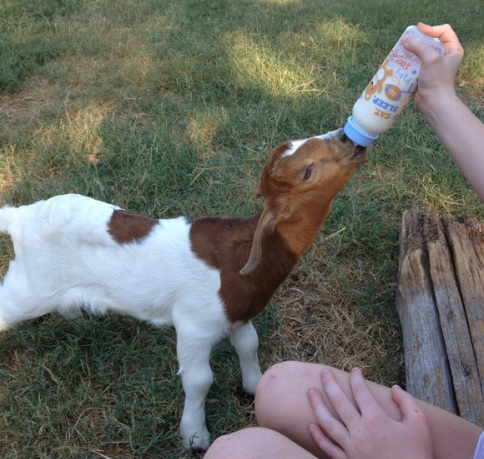