As promised, here is the much anticipated, long awaited, (ok probably not either one truthfully) grand post of all things Texas Bull Nettle!  (Have I built it up enough?)  If you’ve never been caressed by the gentle touch (yes, that is sarcasm) of Texas Bull Nettle, then consider yourself blessed.  I would rather be stung by a wasp than by nettle.  I have read that because Texas Bull Nettle is drought resistant it is perfect for xeriscaping, but having been blessed with an abundance of these plants all over my property, I can’t for the life of me understand why someone would WILLINGLY plant these little fiery green plants.  If you find yourself as blessed with Texas Bull Nettle as we are here at Lone Star Farmstead than you may wish to keep reading to learn more about this plant and whether it has any uses around your home/farmstead (and if you don’t have any of these little joys you can still read along and laugh as you think about my being stung on a fairly regular basis).  Who knows, maybe you’ll transplant some of these wonderful (again with the sarcasm) little plants on your property.

First, some technical information on Texas Bull Nettle.  Texas Bull Nettle, aka Cnidoscolus texanus, is a perennial flowering herb that grows well in loose soil in full sun.  The plant flowers year round.  The flower is white and can actually be an attractive looking flower.  The stalk, leaves, and seed pods are covered in fine hairs which cause the infamous sting.  The plant contains a milky white latex which can be seen if any part of the plant is broken.  The plant belongs to the Family Euphorbiaceae, and like most in the same Family, releases an allergenic toxin upon contact.  The intense pain felt from the sting of one of these little plants is what causes most people to want to eradicate them from their property.  Eradication, however, can be quite difficult.  Texas Bull Nettle is asexual with both the male and female reproductive parts located in the same plant so additional plants aren’t necessary for reproduction in a location. 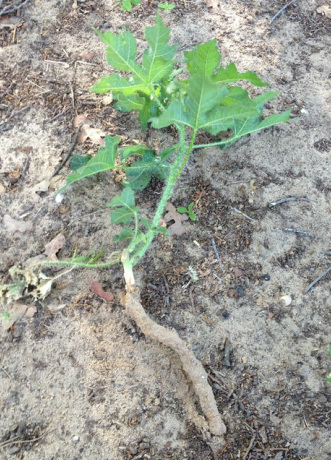 As you can see here I have what appears to be a Texas Bull Nettle plant intact with root.  I dug approximately 12″ into the sandy soil with my handy shovel and removed this plant.  I have been doing this for over 4 years now and while I was quite proud of my accomplishment of removing the root of this, until recently, hated plant I noticed that the plants continued to spring up and grow quite aggressively even in areas where all of the plants have been removed.  I discovered why just a few days ago.  Nothing in the literature I had found warned me about the root system of he Texas Bull Nettle plant.  As I was digging to remove as much root as possible I noticed that I hit something hard.  It appeared to be a tree root but then I realized that the closest tree was too far away to have a root of that size where I was digging.  So I began to dig deeper.  And deeper.  And deeper.  All the while unearthing a monstrous root system. 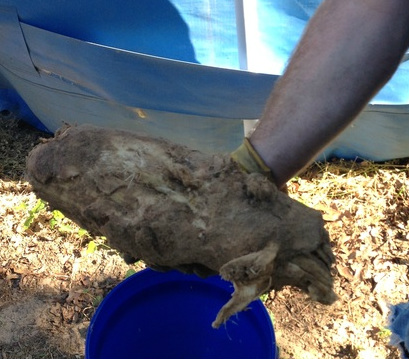 If you look closely you will notice that the left end of the piece (that’s right, piece) of the root system is rounded.  This is the top of the main root and it is from here that the smaller root that was seen in the previous picture grows.  The rounded top was located about 16″-18″ down.  The right side is jagged because the root broke and I didn’t want to keep digging.  You will also notice that there are several smaller roots branching off the sides of the main root.  Some of those were up to 1 -1/2″ in diameter on some of the plants I dug up.  It is because of these massive root systems that the plants can not only survive, but thrive in the dry, hot, Texas summers and cold winters.  I read a story of a family that had inherited a rather large farm from their grandfather.  At one time in the 80’s he had cut of the plant at the top of the root system and placed large #10 cans over the roots, pressed them down, and covered them over.  When the family was discing the property they started accidentally pulling up the cans.  They removed them thinking nothing of it and within months their pasture was covered with Texas Bull Nettle.  Now I don’t know these folks, I only read their story in a forum so how factual the story is I can’t say, but knowing what I now know about this little booger, I’m inclined to believe it.  And just in case you think that I am exaggerating, let me show you another plant still intact.  So if you want to get rid of these nasty little guys, you are going to need to do plenty of digging to make sure you actually get the root. 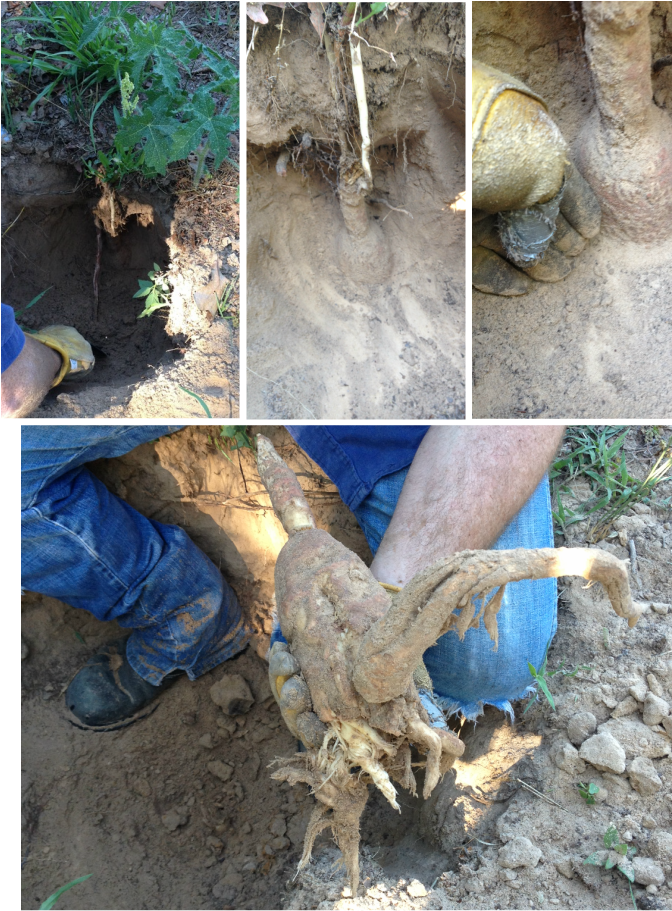 So what is the point of this post you might ask?  Texas Bull Nettle actually has some useful purposes including eating the roots, the seeds, and making tea which supposedly has medicinal benefits.  But as this post is growing quite long and there is still much to cover on the uses and the treatment should you be stung, I think all that is best left to Part 2 which will be up tomorrow so stick around.  God bless!
Like what you see? Please share with your friends and the whole world...